THE FOUR MODES OF MUSIDO:

1. Use of Sound Frequencies

“Musido” is the Way of Music. The word do is used in Asian culture’s way to holistic integration.  That long tradition is honored in the use of Musido.

USE OF SOUND FREQUENCIES:

Pheo Rose has composed and recorded music for optimizing breathing capacity as well creating audio/kinesthetic meditations.  Listening to the music is one aspect of the meditation.  Practicing good breathing techniques and feeling the movement of breathing is the second part of the meditation.  Breathing to Music progressions are found in the Way of the Breath for those who are physically limited.

This Pheo Rose music has been composed, recorded, and had the instruments balanced so that the listener can use the music as a meditation focus.  Each musical piece also has been composed to be very expressive, which enhances the focus on the music.  The use of stereo allows for musical instruments to be heard in a 180 degree range.  As much as possible, the instruments and vocals are placed as shown here: 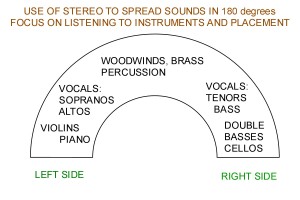 (Headphones or ear inserts are needed for these meditations; even inexpensive ones work)

At every moment you will be able to hear at least two different instruments in different placements. Keep focused on the music and the instrument placement.  As the instruments change stayed focused and change to the next instrument and placement.  As you increase your focus, the intellect and ego/psyche activity drops off.  When you realize you have strayed from the music, re-focus on the instruments placement.  The more a single meditation focus is achieved, the greater the mental stillness that allows the deeper mind to become more conscious.  The deeper mind holds the ageless wisdom, insights, and knowledge that gives perspective to, and peace from, the overused intellectual and ego/psyche activity.

About Each Album in the Progressive Music Series:

Soul Bridge is the first in the Musido series; the bridge from intellect and ego/psyche activity into the deeper mind.  The musical pieces are less than five minutes and provide 2 or more instruments to focus upon at any point.  You may find that holding your focus for five minutes a challenge; this is to be expected.  Each piece has also been purposely composed for a variety of tempos and moods.  (Be sure to read the program notes for special information about the album and each piece.)

Soul Pulses uses some of the same musical pieces, but greatly extends their lengths of time in order to allow you to extend your capacity to maintain a centered focus.  Also, this music album has musical pieces that are arranged from a slow tempo to a quicker tempo; allowing for easier focusing in the beginning pieces, and then require greater focus as musical instruments change at an increasing tempo.  Music is typically arranged with an alternation of fast and slow tempo pieces.  This album takes the listener through a steady progression of slow to quick.  Such an album is excellent for those times you have low energy and need to increase your tempo.   (Be sure to read the program notes for special information.)

Soul Yoga is a powerful and demanding music meditation that combines focused breathing, imaging of Chakras, and musical instrument placement.  To maximize the experience, please practice some of the breathing patterns; especially circle breathing.  Also, use the sound frequencies practice to become familiar with the chakras.  The utmost of concentration and focus will be required; but, will lead to the greatest of benefits.  The program notes provide the necessary information for integrating your breathing pattern with imagery and focus on musical instruments.

Inner Universe is the reward for all this discipline.  The pieces are under five minutes, but the music takes you into your inner universe now that you have reined in, and can hold, stillness of mind.  Stay focused and the music will lead you into vast intimacy of yourself.

This Musido mode is the most encompassing because of an increased body/mind oneness meditation.  The music is a meditation focus. There is the auditory and kinesthetic breathing focus. Added to these is synchronizing Tai Chi style movement forms.  These Tai Chi style forms are biomechanically based, which promotes balance, correct posture, and fine movement coordination.  The forms are purposely very simple so that as many people as possible can use this powerful meditation, and so that the focus can go into the oneness aspect, rather than performing difficulty movement patterns.   These Musido forms will soon be available on YouTube.